Written by Gabriela Henriquez Stoikow on May 10, 2022 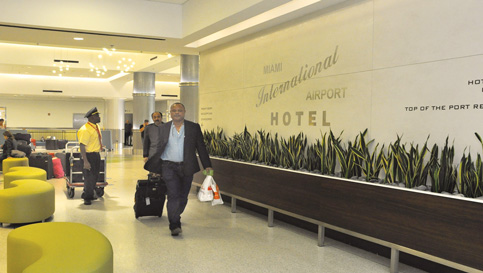 The county extended the second phase of a tender to build a 350-key, 4-star hotel at Miami International Airport through May 25 at the request of bidders. “The county considered the requests reasonable,” an Aviation Department spokesperson sent to the newspaper.

The second phase is to be followed by contract award, which is now expected in October, pending county commission approval. The date of the award before the extension was September.

The project brief released by the Department of Internal Services was first published in July 2020. The county is looking for a 4-star hotel with at least 350 keys, a full-service restaurant and seated bar, food and drinks prepared 24 hours a day. , a business center, meeting and banquet space of at least 20,000 square feet, a fitness center, valet parking, and the possibility of a few concession opportunities for those already at the airport.

FDR Miami Hotel LLC; Mainsail Development International LLC; and Parmco Airport Hospitality LLC are three companies with local ties bidding on the project, although the county won’t know all of the bidders until the end of the second phase, the spokesperson confirmed.

As Miami Today reported in August 2021, Mainsail Development International LLC is a subsidiary of Tampa-based hotel builder and operator Mainsail Lodging and Development, whose Miami-born founder and president Joe Collier previously worked for Marriott in marketing, sales and development. The company is run by hospitality experts with national and international experience.

Parmco Airport Hospitality LLC, is owned by investor-developer Darryl Parmenter and real estate economic advisor Paul Lambert, who is also co-owner and developer of the Miami Wilds water park project next to ZooMiami.

The water park project documentation is being reviewed by the Department of Parks and the County Attorney’s Office to then obtain execution of the rental agreement from the County Mayor.

According to county documents, the hotel project must include a pedestrian bridge connecting the new hotel to Concourse D, and all costs for the design, permitting, construction, operation and maintenance of the hotel must be paid by the dealer.

The project is part of the $5 billion airport capital improvement program which includes five sub-programs: a redevelopment of concourses E and F in the central terminal; an expanded South Terminal, Concourses H and J; the refurbished Concourse D gates to accommodate additional widebody and narrowbody aircraft, as well as larger regional jets; two new hotels, one with a business and conference center with exhibition space and other miscellaneous landside projects; and expansion of aircraft parking and warehouses for cargo operations.

Currently, MIA has a 267-key hotel built in 1959 in the central terminal area; plans to build a new hotel until 2013. In the United States, major airports already have hotels, such as the Grand Hyatt at San Francisco International Airport, the TWA Hotel at John F. Kennedy and the H Hotel. Los Angeles, Curio Collection by Hilton at Los Angeles International Airport.