Four Points by Sheraton established its dominance in the hospitality industry after the hotel was recognized as Africa’s premier airport hotel for the fourth consecutive year.

According to the International Hotel Awards, the hotel stood out from its competitors in terms of design, quality, service and innovation.

“Receiving the leading airport property on the continent for the fourth consecutive year is in itself a remarkable and humbling achievement. This is further reinforced by the fact that we are recognized as a destination of choice for global executives. These accolades do not only serve solidifies our position as an important regional player in the hospitality industry, but is a testament to the passion and commitment of our team.”

“We are committed to reviving the sector after the impact of the pandemic and look forward to a prosperous 2022 with increased tourism,” he said.

The International Hotel Awards, considered the most prestigious award in the world, are judged by an independent panel of industry experts. They focus on design, quality, service, innovation, originality and commitment to sustainability.

Additionally, the hotel was featured in the highly acclaimed World Travel Top 100 Hotels for Executives 2022 as one of the must-visit destinations for traveling executives and business people.

The airport hotel was among notable properties, including The Savoy, London and Park Hyatt, New York. Henry Smart of CEO Destinations said the hotel was outstanding despite the effects of the pandemic.

“Today’s travel industry has been shaped by the pandemic, during this time technology has had an ever-increasing influence. Increasing regulatory and hygiene requirements and greater scrutiny provided by online reviews have both created challenges and increased responsibilities for everyone involved in the travel industry.”

“The CEO Destinations World Travel 100 recognizes outstanding companies in the travel industry that have demonstrated exceptional leadership in their field, as well as companies that we believe will make travelers dream in 2022!” Smart said.

Despite the devastating effects of the pandemic, Four Points by Sheraton deployed a transformational business continuity model to set itself apart from its competitors. 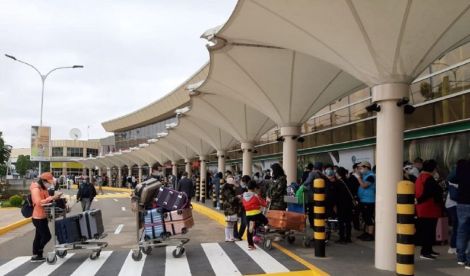 A photo of passengers at Jomo Kenyatta International Airport in Embakasi, Nairobi.