The FAA recently released new standards for the design of vertiports. (Photo: FAA)

In a recent announcement, the Federal Aviation Administration released new design guidelines for vertiports and vertistops, infrastructure intended to support electric aircraft that take off and land vertically. Design standards incorporate input from industry partners and the public and are based on research conducted by the FAA.

The design guidelines cover both public and private vertiports and vertistops that enable electric vertical take-off and landing (eVTOL). Additionally, recommendations listed in associated FAA documents engineering dissertation are described as prescriptive and conservative. The FAA notes that vertiport design guidelines are likely to evolve in the future to a performance-based standard. Therefore, the recently published standards are intended to serve as a guide in the meantime.

The design standards include recommendations for the design and geometry of the area in a dedicated take-off and landing vertiport. This includes the touchdown and take-off (TLOF) area, the final approach and take-off (FATO) area, and the safety zone surrounding the FATO.

The TLOF, per FAA guidelines, must be on flat ground or on a level structure, and it must be centered in the FATO. The FATO design should assume dynamic loads of 150% of the maximum take-off weight of the eVTOL. The FATO and the safe zone must have the same shape as the TLOF (circular, square or rectangular).

Another section of the design standards covers electrical charging and vertiport infrastructure for battery-powered aircraft. “The electrification of aerospace propulsion systems is an evolving field with few industry-specific standards,” the document states. The FAA recommends that designers of charging infrastructure for vertiports consider several aircraft-specific systems. 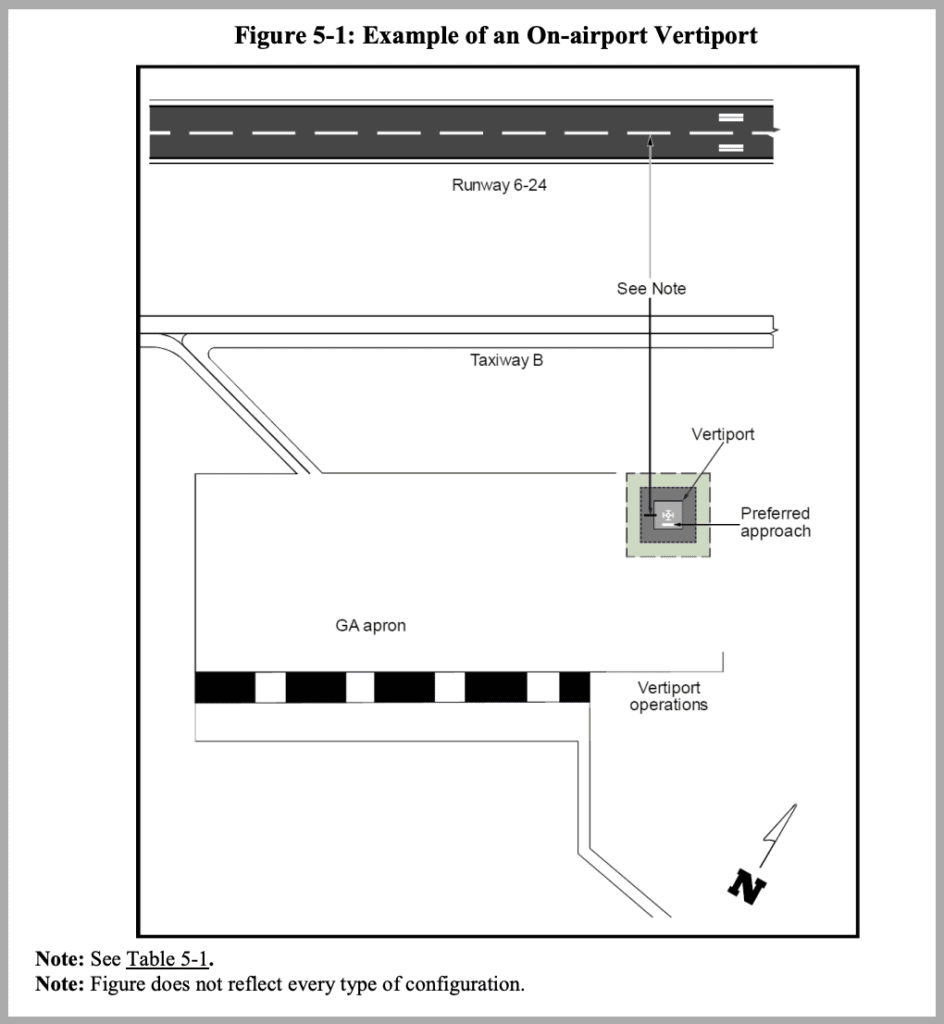 Guidelines for the design of a vertiport at an airport (Photo: FAA)

The FAA also offers a guide for the development of vertiport facilities at airports. The agency notes that separate facilities and procedures for eVTOL aircraft may be required once traffic volume reaches a certain point to affect the operations of other aircraft at the airport.

The TLOF of a vertiport or vertistop built at an airport, according to the FAA, should be located where access to the airport terminal is readily available. For eVTOL aircraft that can perform conventional take-off and landing on a runway, the TLOF can be constructed in a location that provides access to fixed-wing aircraft movement areas.

These design guidelines were released by the FAA in late September. ASTM International, the standards development organization, also released a new standard in August that provides guidance to states and municipalities for the design and development of vertiports and vertistops.

In addition, the European Union Aviation Safety Agency (EASA) has published “Prototype Technical Design Specifications for Vertiports”, a document offering technical guidance and best practices for urban air mobility infrastructure in Europe. These recommendations were published in March 2022 and EASA expects to publish a Notice of Proposed Amendment in the second half of 2023.