NEW DELHI: The Department of Telecommunications (DoT) has released draft policy guidelines to standardize right of way procedures across all states and boost the deployment of telecommunications infrastructure ahead of pan-India rollout of the technology. fifth generation or 5G.

Inconsistencies around state-to-state right-of-way have been a major problem for telecom operators and tower companies.

“The ‘draft policy guidelines on right-of-way (right-of-way) for the establishment of telecommunications infrastructure’ have been prepared by the central government to set out the general principles related to right-of-way permits,” said the Ministry of Communications. in an official memorandum. 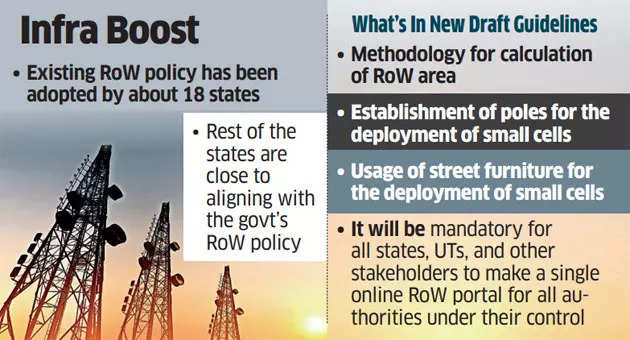 The guidelines prescribed by the Department of Telecommunications mention that in the case of establishing clusters for the deployment of small cells, the application fee should not exceed Rs. 1,000 per application.

“There will be no application fee or compensation for the use of street furniture, established by any person or entity on local/government authority property, for the installation of small cells and OFCs ( fiber optic cable) needed to connect the small cells,” the telecommunications department prescribed.

However, an applicant must submit to the Authority a self-declared notification on the right-of-way online portal for the use of street furniture for the deployment of small cells, along with all relevant details.

“The Telecommunications Engineering Center (TEC) will issue guidelines regarding the structural safety of street furniture for the installation of small cells,” the DoT prescribed, adding that central government authorities will allow the deployment of small cells on public buildings. government buildings and structures at no cost.
As a reminder, the Telecom Regulatory Authority of India (Trai) has launched a pilot program to use street furniture to accelerate the expansion of telecom infrastructure following the impending fifth generation or 5G commercial deployments.

Trai is carrying out pilot projects for the deployment of street furniture in different regions of the country. These trials are currently underway at four sites: the Port of Kandla in Gujarat, the Indira Gandhi International Airport (IGI) in Delhi, the Bengaluru Metro Rail Corporation and the city of Bhopal.

Now, under the draft guidelines, it will be mandatory for all States, Union Territories (UTs) and other stakeholders to create a single online portal for all authorities under their control. These portals will then be integrated with the Central RoW portal to provide a single unified interface for applicants to make RoW requests.

In addition, a request is deemed to have been approved if it has not been approved or rejected within 60 days from the date of the request. “These deemed approvals would be given from the central right-of-way portal,” according to the guidelines.